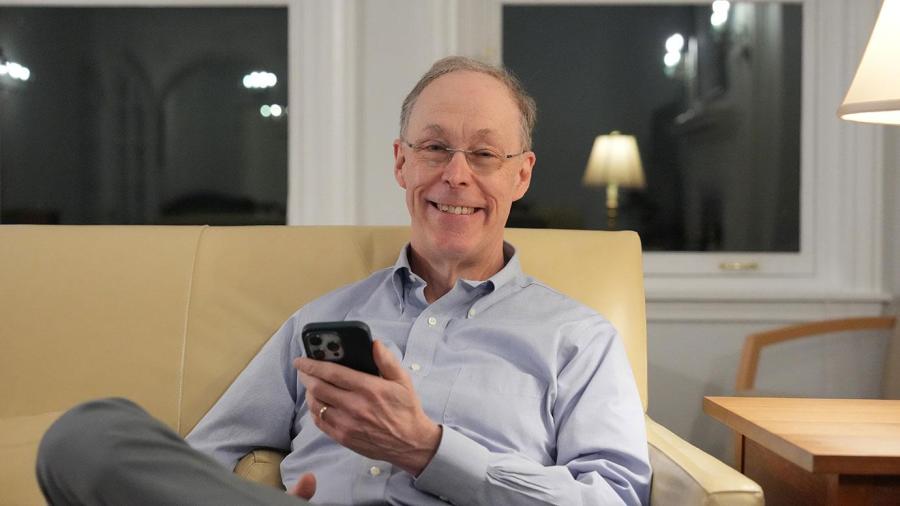 Newly minted Nobel laureate Douglas W. Diamond at his home, hours after learning he won a share of the Sveriges Riksbank Prize in Economic Sciences in Memory of Alfred Nobel 2022. Diamond, the Merton H. Miller Distinguished Service Professor of Finance at the Booth School of Business, was honored Oct. 10 for improving “our understanding of the role of banks in the economy, particularly during financial crises.” Photo by Jason Smith.

Prof. Douglas W. Diamond of the University of Chicago has been awarded the Sveriges Riksbank Prize in Economic Sciences in Memory of Alfred Nobel 2022.

The Royal Swedish Academy of Sciences honored Diamond, the Merton H. Miller Distinguished Service Professor of Finance at the University of Chicago Booth School of Business, and two other economists for improving “our understanding of the role of banks in the economy, particularly during financial crises.” His pioneering research has changed the way people view banks and laid the groundwork for how central bankers, regulators, policymakers and academics approach modern finance.

Diamond shares the prize with Ben Bernanke of the Brookings Institution and Philip Dybvig of Washington University in St. Louis.

“Professor Diamond has made extraordinary contributions to the field of economics and our collective understanding of the role financial institutions play in society, particularly in times of financial crises,” said University of Chicago President Paul Alivisatos. “This is a well-deserved recognition of his groundbreaking scholarship.”

“It did come as a surprise,” Diamond said in a Nobel news conference the morning of Oct. 10. “I mean, people always talk about these things, but I was sleeping very soundly and then off went my cell phone.”

Diamond is considered a founder of modern banking theory. He is known for his research into financial intermediaries, financial crises and liquidity; his research agenda for the past 40 years has been to explain what banks do, why they do it and the consequences of these arrangements.

His earliest research explained how the economic role of banks generated an essential link between the properties of their assets and the form of their liabilities. In “Financial Intermediation and Delegated Monitoring,” a paper based on his Ph.D. dissertation that appeared in The Review of Economic Studies in 1984, he showed how the bank’s special assets (special because they monitored special information about business borrowers) forced them to finance themselves with debt liabilities (deposits) rather than equity and also led banks to diversify across many loans.

He and Dybvig later developed the Diamond-Dybvig model in “Bank Runs, Deposit Insurance, and Liquidity,” which appeared in the Journal of Political Economy in 1983. The Diamond-Dybvig model demonstrates how banks specializing in creating liquid liabilities (deposits) to fund illiquid assets (such as business loans) may be unstable and give rise to bank runs. It shows how banks’ special liabilities, combined with illiquid assets, explain the role of banks, why they may be unstable and why they may need a government safety net (such as deposit insurance) more than other borrowers.

This model has since been used to understand other run-like phenomena in markets during financial crises.

The Nobel announcement also cited Diamond’s work on the function of banks as intermediaries between many savers and borrowers—pointing out their role in assessing borrowers’ creditworthiness and the likelihood of success of their investments, and in monitoring the health of current investments.

In a virtual news conference hosted by the Royal Swedish Academy of Sciences, Diamond commented on how to avoid and respond to financial crises: “The best advice is to be prepared for making sure that your part of the banking sector is both perceived to be healthy and to stay healthy and respond in a measured and transparent way to changes in monetary policy.”

Diamond’s other highly cited works include “Monitoring and Reputation: The Choice Between Bank Loans and Directly Placed Debt” in the Journal of Political Economy in 1991, and “Liquidity Risk, Liquidity Creation and Financial Fragility: A Theory of Banking” in the Journal of Political Economy in 1991. The latter was co-written with Chicago Booth Prof. Raghuram G. Rajan, with whom Diamond has written a series of influential papers on banking and financial crises.

Diamond is associated faculty in the University of Chicago’s Kenneth C. Griffin Department of Economics, teaching in its doctoral program. He has taught at Yale University and was a visiting professor at the MIT Sloan School of Management, the Hong Kong University of Science and Technology, and the University of Bonn.

Diamond earned a bachelor’s degree in economics from Brown University in 1975. He earned master’s degrees in 1976 and 1977 and a Ph.D. in 1980 in economics, all from Yale University.

This story originally appeared at news.uchicago.edu. Click here to see the original article.