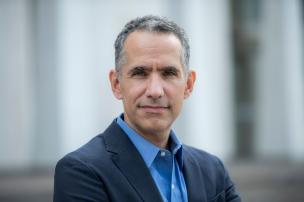 Economist Esteban Rossi-Hansberg has been appointed the Glen A. Lloyd Distinguished Service Professor at the University of Chicago where he will join the faculty of the Kenneth C. Griffin Department of Economics.

Rossi-Hansberg’s research focuses include international trade, urban and regional economics, and macroeconomics. He was most recently at Princeton as the Theodore A. Wells '29 Professor of Economics and International Affairs and is a Research Associate with the National Bureau of Economic Research (NBER), as well as a Research Fellow with the Center for Economic Policy Research (CEPR).

Rossi-Hansberg returns to the University of Chicago after receiving his Ph.D. from the University in 2002 and teaching as a Visiting Professor of Economics in the Booth School of Business during 2018-2019. He was a recipient of the 2019 Robert E. Lucas Jr. Prize for his paper, “The Geography of Development" (Journal of Political Economy 126 [3]: 903‒83).

Rossi-Hansberg’s appointment at UChicago will be effective on July 1.