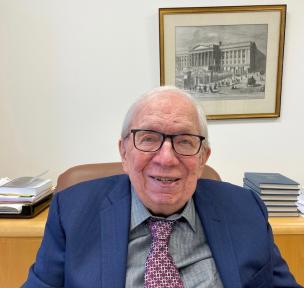 “Tolley was part of a group of very distinguished economists at Chicago,” says James J. Heckman, the Henry Schultz Distinguished Service Professor in Economics. “They created an atmosphere that has been accurately described as really thinking the purpose of the economics department was a serious one and there to solve the problems of the world — and to do it in a way that was lasting and empirically grounded in understanding a wide range of public policy questions. George was in that group and was a very active player — a student of that environment who kept it alive and helped it flourish.”

Born in Washington, D.C., Tolley’s early life — particularly living through the Great Depression — shaped his interest in economics. “I was going to devote my life to make sure it didn't happen again,” Tolley said in a 2018 interview. “If I want to do something useful, that's what I should do.”

But he also had an inside look at the world of economics through his father, Howard R. Tolley, who served as chief of the Bureau of Agricultural Economics (subsequently consolidated with other USDA units) during the New Deal and World War II. The younger Tolley recalls summers spent at a desk in his father’s outer office.

Tolley attended American University for undergraduate studies before heading to UChicago for graduate school, earning his PhD in economics in 1955. He said he rejected the idea of going to an Ivy League school, instead preferring the idea of “rough and tumble” Chicago where he found more intellectual freedom without the confines of being proper.

It was here he encountered some of the best-known minds in economics and mathematics: Theodore Schultz, Milton Friedman, Frank Knight, Harry Markowitz, Jacob Marschak, Tjalling Koopmans, D. Gale Johnson, and Oskar Lange, to name a few. (He was also good friends with fellow student Mike Nichols, who went on to direct classic movies including The Graduate.) Tolley was part of Schultz’s agriculture group at UChicago, studying problems of agricultural modernization in the U.S. and worldwide. The primary paper from his dissertation was published in the Journal of Farm Economics and received the cash prize for excellence from the American Farm Economics Association.

After receiving his PhD, Tolley spent 11 years as a faculty member at North Carolina State University as associate professor of agricultural economics before returning to UChicago as a professor in 1966. He shifted his focus from agriculture to urban economics, establishing urban economics as an area in the UChicago graduate program by the early 1970s — a rare offering in economics departments at the time. But his approach remained in the Chicago tradition in that it drew on price theory to analyze urban problems. Tolley served as director of the Center for Urban Studies at UChicago from 1978 to 1985. More recent work in the field of urban economics is often based on Tolley’s city bigness framework.

Tolley was particularly compelling for his ability to move across economic fields and subjects, which also gave his work deep policy relevance. He was an internationally recognized leader in the development and application of techniques for measuring costs and values that are determined outside of conventional markets. He used such techniques to bring a modern lens to the field in addressing urban and environmental economics. For one example, Tolley developed a practical benefit-cost framework for dealing with pollution in the Chicago area with funding from the National Science Foundation. 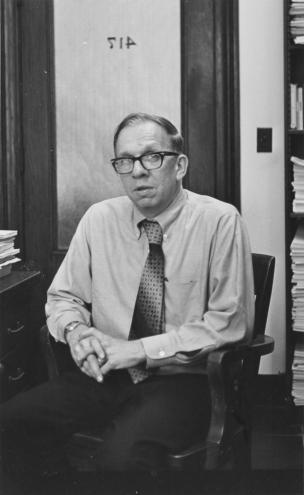 “George Tolley hired me as his research assistant when he was a young assistant professor in the economics department. He was a very patient teacher of his young helper,” says Lester G. Telser, professor emeritus in Economics. “At the end of the summer I had to decide whether I would return to Harvard. I made an appointment with Theodore W. Schultz, head of the economics department. Given my experience with George, T. W. did not have a hard sell. I switched to the University of Chicago.”

Beginning in the 1960s, Tolley consulted for federal, state, and municipal agencies on urban and environmental problems. His research and expertise helped with the design of such policies as the Clean Air Act, and his techniques have helped determine the valuation of urban and environmental amenities and improvements in health and medical treatments. This included his seminal work on health economics, Valuing Health for Policy: An Economic Approach, which moved the field to a broader view of the economics of wellness.

“His work on public policy questions was very influential when it was written and remains so now,” says Robert E. Lucas, the John Dewey Distinguished Service Professor Emeritus in Economics.

Tolley’s work outside of academia included his time as director of the Economic Development Division of the Economic Research Service of the USDA from 1964 to 1965 — the direct descendant of the Bureau of Agricultural Economics that his father once led. In 1974 and 1975, he served as deputy assistant secretary in the Office of Tax Analysis of the U.S. Department of the Treasury. Tolley also served on the President's Task Force on Urban Renewal, the National Academy of Sciences Committee on Automotive Pollution, and the Energy Engineering Board at the National Research Council.

Tolley was elected fellow of the American Association for the Advancement of Science in 2003 and founded the journal Resource and Energy Economics, which published a special issue in his honor in 2001. He held visiting professorships at the University of California at Berkeley, Purdue University, Nankai University, and Guelph University. He was the recipient of the Honor A Colleague award by the Society for Benefit Cost Analysis in 2018. His published works include 22 books and more than 50 articles. He also served as CEO of RCF Consulting — his own firm — where he directed mail volume forecasting work for the U.S. Postal Service and helped the USPS develop approaches to postal volume forecasts.

Many in the UChicago community also recall Tolley as a mentor. He directed 69 PhD dissertations as committee chair, one each year in his 12 years at North Carolina State and 57 at UChicago. In the 2001 special issue of Resource and Energy Economics, University of Kentucky economist Glenn C. Blomquist made note of Tolley’s ability to educate students, colleagues, and policymakers:

George S. Tolley’s gentle but probing questions have influenced his colleagues and generations of graduate students to think more clearly about how to use their economic tool kit to answer policy questions. He has been equally able to influence the broader group of social scientists and public administrators who develop and implement public policy. As a member of multidisciplinary academic committees and while working with and in government, he has been able to focus attention on basic economic questions. How will individuals react to this policy? How will achieving this policy goal affect the attainment of other policy goals? While many economists can tell noneconomists these things, George’s great talent is in getting them to believe that they had discovered these issues on their own.

Tolley gave his time generously to others, whether exchanging ideas, offering advice, or establishing collaborations. Numerous economists received his guidance, many of whom also rose to prominence in public service, financial institutions, and universities across the globe.

“His students were fiercely loyal to him,” Heckman says. “He was very active on PhD theses and working with students. He’s got a big legacy of producing people and producing ideas — and his students are continuing that.”

Economist Vinod Thomas, AM’74, PhD’77 and currently a visiting professor at the National University of Singapore, studied under Tolley and eventually collaborated with him on research for the World Bank. He says Tolley had a highly respected global presence and was a “low-key but forceful leader in applying empirical economics to vexing country problems.” But locally on the UChicago campus, Thomas remembers Tolley giving liberally of his time, including his personal time.

“I recall putting the finishing touches to my PhD thesis while going with him to pick up some items at the supermarket for a late meal that Alice Tolley — with their daughter Catherine in our midst — would graciously host at their home in Hyde Park.”

George is survived by his wife Alice, his daughter Catherine, son-in-law Bill, and two grandsons.  The Tolley Family requests that gifts in memory of Prof. Tolley be directed to the George S. Tolley Prize. The prize was initiated by Thomas to recognize and reward a third-year doctoral student in the Department of Economics whose research paper demonstrates the potential for the impact of economic analysis on policy. A memorial gift may be made online. Please email Yasmin Omer for more information. Plans for a memorial service will be forthcoming.

Photo 1: Prof. Tolley at his desk with a picture of the US Treasury, where he worked, behind him.

Photo 2: Prof. Tolley early in his career at UChicago

This story was originally published as a news article by the Division of the Social Sciences at UChicago. The original article can be found at socialsciences.uchicago.edu.