The Journal of Political Economy (JPE) is one of the oldest and most prestigious journals in economics. The journal publishes highly selective and widely cited studies across a wide range of subject areas in economics. In line with these objectives, the JPE is launching two new journals, as well as announcing changes to its editorial board and policies.

The journals will publish high-quality theoretical and empirical academic papers in the areas of microeconomics and macroeconomics, respectively. The journals will be vertically integrated with the Journal of Political Economy. These journals aspire to publish the highest quality research in their respective fields, outside the top general-interest journals.

In the last decade, the number of submissions to the Journal of Political Economy has more than doubled, reflecting a broader trend among academic economists. These new journals will enable a broader set of papers to be published in JPE journals, including papers that are deemed too specialized to fit in the Journal of Political Economy. This will allow a broader set of researchers’ works to be published under the JPE banner. The vertical integration with the JPE will benefit the profession at large by economizing on referees’ time and lowering time to publication for those successful papers. For details of the submission process, and integration with the JPE, visit the JPE Macro and JPE Micro submission pages.

The JPE underwent significant changes to its editorial board in 2021. Harald Uhlig’s term as lead editor ended, and Magne Mogstad took over the role on July 1. In addition, James Heckman’s editor term ended, and five new editors joined the board.

The current team of editors consists of the following ten economists:

In addition, Mark Bils (University of Rochester), Leonardo Bursztyn (Chicago, Econ), and Rachel Griffith (University of Manchester) will be joining the team of editors in 2022. Only Chad Syverson’s term will be ending in 2022.

The expansion of the team of editors serves several purposes:

It reduces the workload of each editor and expands the board’s expertise in a larger number of subject areas in economics. This allows the JPE to continue to improve the quality of the editorial work and reduce turnaround times. Table 1 and Figure 1 present the turnaround times for the current team of editors at the JPE. 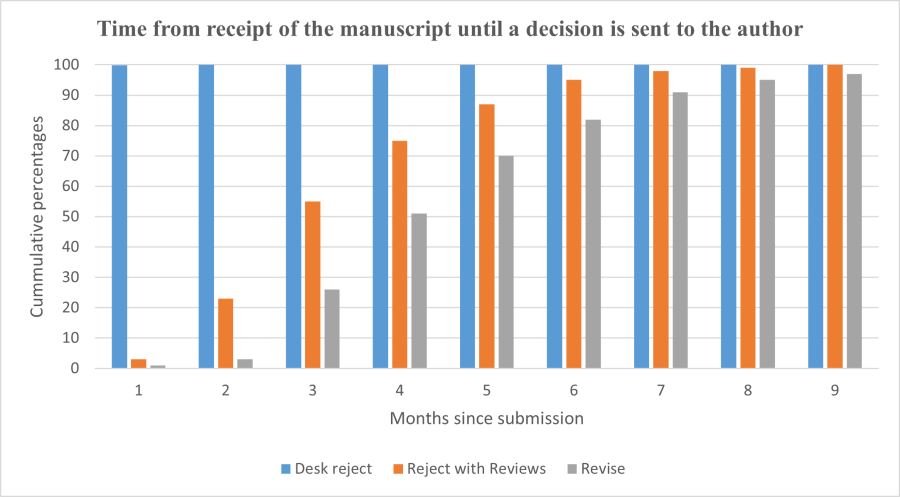 The expansion of the team of editors also allowed the JPE to implement a stricter conflict-of-interest policy, aimed at improving transparency and helping to maintain trust in the editorial process:

These changes are a direct response to the tremendous growth and potential of both the journal and the field of economics. The JPE is 130 years strong, and these expansions will help to ensure another century of economic thought leadership.