Lester G. Telser, a pioneering figure in economics who studied and taught at the University of Chicago for more than 50 years, passed away Sept. 3. He was 91.

A prominent scholar during a defining era of UChicago economics, Telser, PhD’56, made significant contributions to the field. Described by his colleagues as a rigorous, eager intellect, Telser maintained a wide range of research interests, including futures and forward markets, industrial organization, and his life’s work—core theory, a variant of game theory. 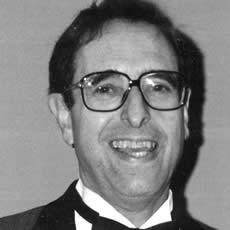 “I was continually impressed by his broad knowledge and interests in economics well beyond the very important contributions he made to economic theory and industrial organization,” said Lars Peter Hansen, the David Rockefeller Distinguished Service Professor in Economics, Statistics and the Booth School of Business. “His intellectual curiosity was remarkable.”

Born in Chicago on Jan. 3, 1931, Telser grew up in the midst of the Great Depression—a period that would heavily influence his decision to study economics. A few years later, his family moved to the Hyde Park neighborhood, a community Telser called home for most of his life.

He attended Roosevelt University soon after its founding, where he began to study mathematics and economics. Though he was a gifted mathematician, he was drawn to the real-world problem solving of economics.

In a 2017 interview for the Berkeley Bancroft Oral History Project, Telser said: “The notion that motivated me, in living through the Great Depression, is very simple: How could things get so screwed up? It bothered me that it ought to be possible to figure out how to do things better.”

After a year at Harvard University, Telser returned to Chicago to earn his Ph.D. in economics from the University of Chicago in 1956. As a graduate student, he served as a research assistant at the Cowles Commission, which applies mathematical and statistical analysis to economic theory. His thesis, advised by Milton Friedman, among others: “The Supply of Stocks: Cotton and Wheat” became a seminal study on futures markets—a scholarly focus of Telser’s for decades.

In the fall of 1956, while an assistant professor at Iowa State College, Telser was drafted into the U.S. Army. After his two-year service, Telser returned again to the University of Chicago as a faculty member in the Graduate School of Business (now Chicago Booth). In 1964, he joined the Department of Economics as a professor, a position he held for over three decades.

Though Telser had many research interests, he is probably most known for his work on core theory—a variant of game theory that involves groups of people working cooperatively, as opposed to individuals, to maximize their advantage. “He was doing game theory when virtually no one else was,” said James Heckman, Henry Schultz Distinguished Service Professor in Economics and the College.

He was doing game theory when virtually no one else was.

Not easily swayed by prevailing sentiments or department politics, Telser was driven by his own intellectual curiosity rather than what was popular. “He kept his own compass; he went his own course,” said Heckman. “There were a lot of topics he did that were not standard at the time, that pushed out the frontier. It made him an interesting person as a colleague and as an economist.”

Telser became a leading expert on core theory, publishing several influential books including Competition, Collusion, and Game Theory; Theories of Competition; and The Core Theory in Economics: Problems and Solutions.

According to Robert Shimer, the Alvin H. Baum Professor in Economics and department chair, core theory remains “not only an important tool for analyzing antitrust regulation and other important topics in industrial organization, but also to study voting and the provision of public goods.”

A patient and generous teacher

Alongside his own contributions to the field, Telser’s active engagement with his students was equally significant. Far from a passive lecturer, he led students in lively discussions—often tailored to their interests. He challenged them to voice their own viewpoints and taught difficult theoretical concepts with clarity and precision. Over the course of his career, Telser supervised over 150 dissertation projects and many Ph.D. exams.

“The generosity to share his knowledge with his students was, in my view, unparalleled,” said Victor Lima, PhD’01, a senior instructional professor in Economics and the College.

A former student of Telser’s, Lima participated in Applied Price Theory workshops, in which the accomplished economist worked closely with his students and fostered a rigorous, yet thoughtful and encouraging environment. When a student struggled with a concept, Lima said, Telser would patiently lead them through it.

He would see you through until you really understood things well.

After his retirement in 1997, Telser remained a vibrant member of the academic community at UChicago. He continued to publish papers, engage in lively debates with colleagues and dole out book recommendations.

“When I think of Lester, I think not only of an off-the-charts great economist, but also an all-around brilliant man with deep knowledge in a lot of different fields,” said Lima. “He was a very generous, kind man.”

Telser’s wife Sylvia, whom he married in 1956, preceded him in death in 2020. He is survived by his children Joshua (married to Esther Tryban) and Tamar (married to Ronald Schwartz), his grandchildren Leena Schwartz and Cara Schwartz, his younger brother Alvin Telser (married to Karen Telser), and his nieces and nephews Anna Daniels, Katie Telser, Jeffrey Trossman, Cindy Goldfarb, Andrew Trossman and Melanie Trossman.

View the original obituary for Lester G. Telser at news.uchicago.edu.